Leg length discrepancy is a condition where the length of one leg is different than the other (shorter or longer) because of either or both a functional (muscle/posture) or structural (bone/cartilage) abnormality. In the specific a functional leg length occurs when your legs are the same, but another condition such as pelvic tilt or piriformis shortening creates the appearance of one leg being longer or shorter than the other. A structural leg length inequality it means that there is a true difference. Osteopaths, chiropractors and physiotherapist should be able to determine the degree of leg length inequality using visual inspection and manual tests. 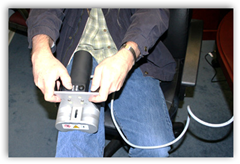 Some children are born with absence or underdeveloped bones in the lower limbs e.g., congenital hemimelia. Others have a condition called hemihypertrophy that causes one side of the body to grow faster than the other. Sometimes, increased blood flow to one limb (as in a hemangioma or blood vessel tumor) stimulates growth to the limb. In other cases, injury or infection involving the epiphyseal plate (growth plate) of the femur or tibia inhibits or stops altogether the growth of the bone. Fractures healing in an overlapped position, even if the epiphyseal plate is not involved, can also cause limb length discrepancy. Neuromuscular problems like polio can also cause profound discrepancies, but thankfully, uncommon. Lastly, Wilms? tumor of the kidney in a child can cause hypertrophy of the lower limb on the same side. It is therefore important in a young child with hemihypertrophy to have an abdominal ultrasound exam done to rule out Wilms? tumor. It is important to distinguish true leg length discrepancy from apparent leg length discrepancy. Apparent discrepancy is due to an instability of the hip, that allows the proximal femur to migrate proximally, or due to an adduction or abduction contracture of the hip that causes pelvic obliquity, so that one hip is higher than the other. When the patient stands, it gives the impression of leg length discrepancy, when the problem is actually in the hip.

The effects vary from patient to patient, depending on the cause of the discrepancy and the magnitude of the difference. Differences of 3 1/2 to 4 percent of the total length of the lower extremity (4 cm or 1 2/3 inches in an average adult), including the thigh, lower leg and foot, may cause noticeable abnormalities while walking and require more effort to walk. Differences between the lengths of the upper extremities cause few problems unless the difference is so great that it becomes difficult to hold objects or perform chores with both hands. You and your physician can decide what is right for you after discussing the causes, treatment options and risks and benefits of limb lengthening, including no treatment at all. Although an LLD may be detected on a screening examination for curvature of the spine (scoliosis), LLD does not cause scoliosis. There is controversy about the effect of LLD on the spine. Some studies indicate that people with an LLD have a greater incidence of low back pain and an increased susceptibility to injuries, but other studies refute this relationship.

On standing examination one iliac crest may be higher/lower than the other. However a physiotherapist, osteopath or chiropractor will examine the LLD in prone or supine position and measure it, confirming the diagnosis of structural (or functional) LLD. The LLD should be measured using bony fixed points. X-Ray should be taken in a standing position. The osteopath, physiotherapist or chiropractor will look at femoral head & acetabulum, knee joints, ankle joints.

Treatment is based on an estimate of how great the difference in leg length will be when the child grows up, Small differences (a half inch or less) do not need treatment. Differences of a half to one inch may require a lift inside the shoe.

how to increase height by yoga

Large leg length inequalities can be treated by staged lengthenings or by simultaneous ipsilateral femoral and tibial lengthenings. Additionally, lengthenings can be combined with appropriately timed epiphysiodesis in an effort to produce leg length equality. Staged lengthenings are often used for congenital deficiencies such as fibular hemimelia, in which 15 cm or more may be needed to produce leg length equality. We typically plan for the final lengthening to be completed by age 13 or 14 years, and allow at least 3 years between lengthenings. Lengthening of both the tibia and femur simultaneously requires aggressive therapy and treatment of soft tissue contractures. Curran et al[57] reported the need for surgical release of soft tissue contractures in 3 of 8 patients treated with simultaneous ipsilateral femoral and tibial lengthenings. Lengthening over an IM nail can be done in an effort to decrease the amount of time the fixator needs to be worn and to prevent angular malalignment. This technique requires that the patient be skeletally mature and it carries a higher risk of osteomyelitis (up to 15%). Additionally, if premature consolidation occurs, a repeat corticotomy is more difficult.
« Do I Have Pes Planus?? Do You Understand Heel Pain? »
Profile